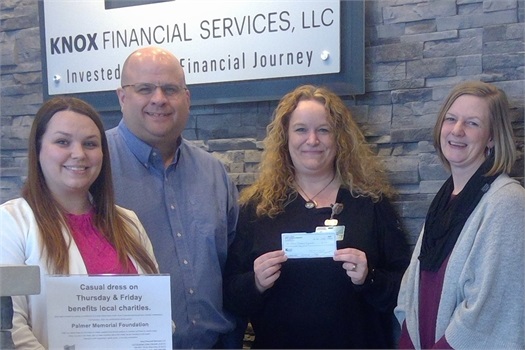 Palmer Memorial Foundation is the recipient of our January, 2020 contributions.

With our casual dress on Thursdays and Fridays, please know we will continue to maintain our focus on client's needs.  When you are in the office, ask our team members about the charitable organization selected for the current month.   A little fun and helping a great cause - a winning combination.

January 17-19, 2020  |  Dubuque, IA: Knox Financial team members attended our 2019 Summit, "Look Forward to 2020!"  The annual conference is an opportunity to share best practices, receive training and implement processes to improve services for our clients.  This year's conference included training about the service enhancements we will offer clients in the coming year.

Bob Cogan's presentation, "The Firms Position for 2020" covered strategies and processes necessary to succeed in the new year and beyond.  Dr. David Gehling's "People, Priorities, Progress. The Pathway for 2020" showed how our individual actions may have meaningful impact to our clients.  G.W. Bond provided education on the new tax laws with "Taxes in 2020."  Jason Knox presented information about our firm's milestones in 2019, our strategies for 2020, including our preparations for coming FINRA regulation BI (best interest).  The weekend events also included team building activities.

Thank you for all that attended.  We Look Forward to 2020!

With our casual dress on Thursdays and Fridays, please know we will continue to maintain our focus on client's needs.  When you are in the office, ask our team members about the charity we are donating to this month.   A little fun and helping those less fortunate than us - a winning combination.

All of us at Knox Financial wish you the most joyous Christmas and a prosperous 2020.

This is Jason's 10th year attending Lincoln Investment's Wealth Management Forum.  Jason Knox commented: “With our ever-changing industry, our core mission - helping our clients achieve financial success-has not changed since I started in the business over 20 years ago.  The ways we analyze and present information, the services we provide and products we use continually evolve.  Lincoln Investment and Capital Analysts are great partners providing resources, technology, experience and compliance while our team assists our clients in pursuit of their financial goals.  I truly appreciate the Lincoln Investment Companies' commitment to provide resources while our firm  remains independent and focused on our clients’ needs.”

Lincoln Investment is celebrating their 50th anniversary.  Lincoln is a leading broker/dealer with over 1,100 financial advisors nationwide and serves the financial needs of over 364,000 clients representing $36 billion in assets. 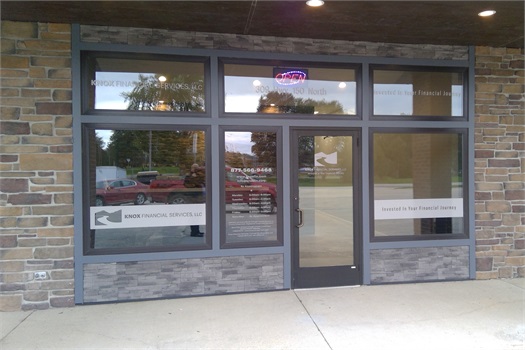 “I’m very excited to see the West Union office open," commented Jason Knox. "We truly appreciate our clients, and look forward to meeting with them in their choice of location."

July 25th, 2019  |  Decorah, IA:  Knox Financial hosted an open house during the Nordic Fest opening ceremonies.  https://nordicfest.com/  Thank you to all that attended, we enjoyed our visits with you.

July 6th, 2019  |  Arlington, IA: Team members from Knox Financial participated in the Arlington Days Parade and enjoyed catching up with our friends in the area.

July 4th, 2019  |  Aurora, IA: Knox Financial team members enjoyed participating in the parade and visiting with our friends in the area.

June 29th, 2019  |  Elgin, IA: Knox Financial team members participated in the Elgin Homecoming Parade.  After the parade, we enjoyed visiting with friends and local activities.  We look forward to the next parade in 2024.

June 1st, 2019  |  Decorah, IA: We are excited to begin communicating with clients via text message!  Our number for text (SMS) messages is 563-412-4770.  At Knox Financial, we wish to communicate with each client in the manner they prefer, be it in person, phone, email and now text!

May 30th, 2019  |  Waterloo, IA:  Amber Knox and Steffani Otto passed their Iowa life insurance examinations.  Congratulations to our team members for their success.

May 21-22, 2019  |  Decorah, IA: Melissa Taber, Compliance Advisor from Lincoln Investment, visited our office locations for our annual inspection.  This was an opportunity for advisors and staff to review our current procedures and operations, to help ensure compliance with industry regulations and firm policies. 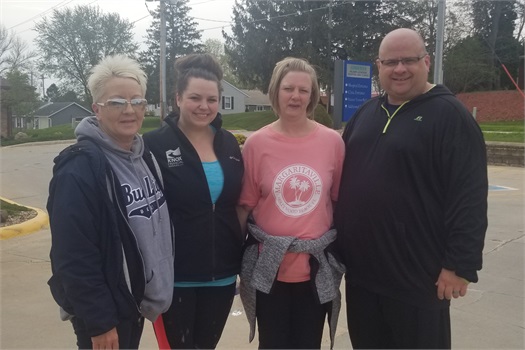 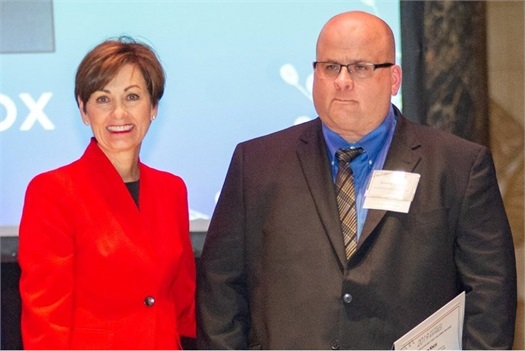 In 1985, the Iowa Legislature adopted the National Main Street Center’s Four Point Approach to district revitalization by establishing Main Street Iowa within the agency that is now the IEDA. Since inception, the state program and its communities have been considered examples of excellence in the national effort to revitalize historic commercial districts across the country.

Jason Knox presented a summary of our prior year, the state of Knox Financial, and the steps we will implement in 2019 to elevate our clients' experience.

Dr. David Gehling presented a "A Check-Up From The Neck Up", where we learned how "being" instead of "doing" may lead to better personal and professional outcomes.

Gary Bond provided a summary of the many tax law changes.

The annual conference is an opportunity to share best practices, receive training and implement processes to improve services for our clients.  Thank you to our staff and guests for taking the time to attend.  We Look Forward! to 2019!

December 6th, 2018  |  Decorah:  Knox Financial welcomed clients and guests to our Look Forward to 2019! holiday open house.  Thank you to all that attended.

Thank you to Tim Leonard, Sr. Advisor Consultant from Lincoln Investment, for assisting with our open house.

All of us at Knox Financial wish everyone a happy holiday season and a wonderful new year!

Amber Knox commented, “Lincoln's best asset is their people. They are always willing to go the extra mile assisting our local office team in delivering solutions for our client's individual needs. They are great partners, and I look forward to the years to come.”

Steffani Otto added, "Doing business with Lincoln is fast, easy, and most important, accurate. This allows Jason and our team to spend more time focusing on our clients’ needs.”

September 5th, 2018  |  A second opinion of your financial situation may provide you a new perspective, useful information, or reassurance.  We are pleased to announce our second opinion service.  Using the initial steps of our Look Forward! planning process, our team analyzes your current plan and portfolio.  Regardless of the outcome, you will receive a professional analysis of your current situation.  Contact Us for an initial discussion to see if you are eligible for our complimentary Second Opinion Service.

July 23rd, 2018  |  At a time when instant information is available on almost any device, 24/7, we are pleased to provide the same access to your investment portfolio.

We are also pleased to make available automated reports of your accounts on a monthly or quarterly basis.  Each month or quarter, you may receive custom account reports via email.  Contact Us to get started.

July 9th, 10th & 11th, 2018  |  Knox Financial welcomed Robert Cogan from Strategyb4tactics for Team education.   Mr. Cogan worked with our Team to utilize state of the art technology and processes that will enhance the services available to our clients.  We Look Forward! to implementing more innovative ways to communicate with and serve our Clients' needs.

Mr. Cogan holds CLU and ChFC designations and started his career as a financial advisor, becoming an associate branch manager before advancing to Vice President of Marketing, then CEO and Vice Chairman of Capital Analysts Incorporated, an independent broker/dealer and Registered Investment Advisory firm. He served as chairman of the B/D division of the IAFP (the predecessor of the Financial Planning Association) and is a founding board member of the Financial Services Institute. He also served two terms on the NASD (predecessor of FINRA) insurance and independent distribution committee.  Mr. Cogan has more than four decades of experience in the financial services world.

May 22nd, 2018  |  Riskalyze further equips our Advisors to help Clients determine the most suitable amount of risk for their investments.

Riskalyze is an enhancement to our existing mathematically driven Look Forward! planning process. Riskalyze assists our Advisors to better pinpoint our Client’s exact comfort zone for downside risk and potential upside gain, and more accurately align their investment portfolio to their desired risk level. If you are concerned about risk in your portfolio, contact us for your risk analysis.

May 8th, 2018  |  Jason Knox, AIF®, has earned the Certified Retirement Counselor® certification. Jason earned this Certification by meeting specific education and experience requirements, committing to a Code of Ethics and annual education requirements. The CRC® program helps ensure the Advisor is properly equipped to assist the tremendous retirement challenge facing all Americans.